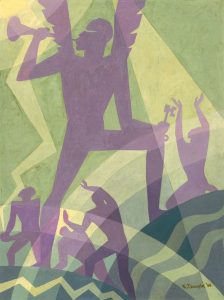 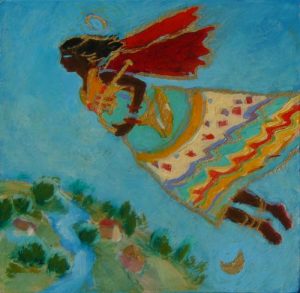 The Harlem Renaissance of the 1920’s was one of the most significant eras of African American culture, bringing a rebirth of visual, performing and literary arts.  Harlem was the epicenter of this new movement, producing many notable and influential artists of the 20th century. These artists help break the mold of the stereotypes black Americans faced in the arts and in society.  One of the leading artists in the movement was Aaron Douglas, painter and muralist.  Instructor, Bobbi Boyd will reflect on the ideas and artists of this moment in time, and feature Douglas’ painting, “The Judgement Day”. Students will choose this image, or a folk art piece in bright colors- either pre-drawn, or will trace the image, as Bobbi teaches watercolor techniques.  Each student will be able to complete their piece to take home.  Be sure to see the full line up of activities for the day, during Art Getaway.  The event runs from 12-6.

Bobbi’s Story:  Bobbi is a fine artist from Laguna Beach, California who recently relocated to Bastrop because she was drawn to its colorful history, beauty, and interesting mix of locals. She sees an endless supply of things to paint!  A child of military people, Bobbi was born in Augsburg Germany and lived in the Bavarian Alps the first three years of her life. Also living in to Japan, Hawaii, and various locales in the US have strongly influenced her world view and vision.  Bobbi’s work celebrates cultures and travel themes that are often are international.   In 2000 art went from being a part-time interest to a full-time passion, and Bobbi went to Laguna College of Art and design to get her BFA in fine art. While still attending school, Bobbi was accepted into the prestigious exhibition of Laguna’s Festival of Art, and was an exhibitor for 4 years. During that time, she discovered her gift and passion for teaching art.  She maintained a studio gallery in Laguna, and exhibited her work as well as taught workshops and tutored small groups and individuals. Bobbi also painted her way through Ireland and went to Thailand on a mission’s trip. She rode an elephant who left the line and headed for the pond, but that’s another story. 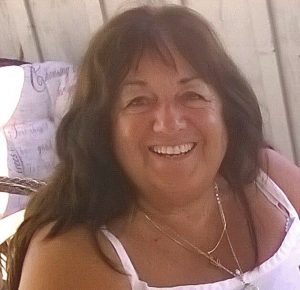