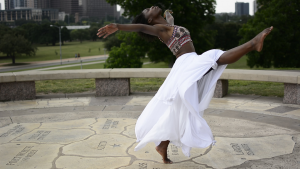 It is relatively assumed that art is the reflection, preservation and predictor of culture. We see this concept in many different forms of art. Each forms has its own mode of transmission. Movement transmits at a symbolic level. Movements are crafted to form symbols that represent motifs from culture. The very nature of symbols is to communicate at a primitive level, which surpasses the sophistication and complexity of the prefrontal cortex.

This workshop’s primary mission is to experience the dynamic relationship between the mover, the movement, and culture. How does the mover internalize culture in the environment? Come learn about Black culture of dance throughout the diaspora.

No dance experience is necessary, and no special attire is needed.  Just wear clothing you can move in.

Sadé is a multifaceted artist, healer and cultural curator. Her expertise spans from performance, to directing, to healing arts. If it has to do with arts+ culture — she’s got it! She is a content creator, producer and executor. A powerhouse that ignites everything (and everyone) she touches.

Sadé has performed in Collective Thread Dance Festival, Capital City Black Film Festival, Big Range Austin, Women and Their Work, Frontera Fest, among other places in Austin and New York. She’s been commissioned by Austin Community College, Alamo Drafthouse, Facebook, and The University of Texas at Austin, to name a few. Her awards include Best Movement for “For Colored Girls Who Have Considered Suicide When The Rainbow Is Enuf (2012)”, by the Austin Critic’s Table, Fire & Brimstone and B. Iden Payne Awards for Best Choreography in “Hands Up Hoodies Down (2014 & 2015) ”and B. Iden Payne Award for Best Choreography of the Year (2016).

In addition, she has created wellness programming using movement. It has proven successful at The Settlement Home for Girls, African American Heritage Facility, Children in Natures Workshop, Women’s Conference of Central Texas,and soon at SXSW. She also works on an individual basis through private sessions.

She is proudly the co-founder and Executive Artistic Director of Ashé Arts, a performing arts organization dedicated to the preservation and presentation of Black Arts as a cultural conduit.

Check out the services she has to offer here. 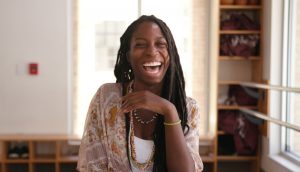